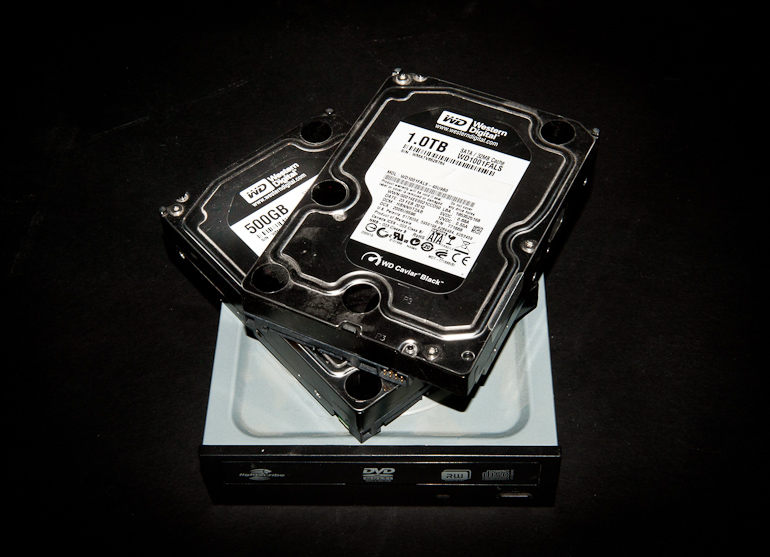 In honor of Halloween, I present to you the sad tale of my dead hard drives.   Yes, the Warped Prism suffered a major technological blow about a week or so ago.   While replacing the power supply inside my computer tower, I somehow triggered some sort of overvoltage event that killed BOTH my internal hard drives and DVD drive at the same time.   I will spare you the long twisting tale of troubleshooting that took place to piece together what had actually transpired.   The bottom line was, both the hard drives were dead.   There was some hope of bringing them back to life, like the six million dollar man, but alas that did not pan out.   I opened them up (carefully), and found that a big chip on the circuit board in both…the “smooth” motor controller chip was burned.    That effectively ended the quest for resurrection, and professional data recovery costs nearly six million dollars.  OK, I made that up, but it is still too expensive for me.

What did I loose?   Well, I had all my photos on the second internal drive, on the theory that if the main drive with Windows and other programs on it failed, the photos would survive.   I never expected to loose both drives at the same time.   I did have a partial (probably 80 percent complete)  backup of photos on an external drive, so I recovered those.   I lost all my originals of several more recent excursions, like the car show and those at Sunset Road/Hawk Road I recently posted.   Those were not yet backed up.  Perhaps most distressing….I lost my Lightroom catalog backups.   I thought those backups were going to my external drive, but apparently they were backing up to one of the now dead internal drives.  So about two years of Lightroom edits are gone, in the sense I can’t go back and pick up where I left off on anything.   The finished products of my best material still survive as large jpgs on my website, which is some consolation.   I am starting over with Lightroom, and have imported all my originals that were backed up and moving on with my life.

1. Back up your originals, preferably externally.

2. Back up your Lightroom catalog, preferably somewhere external.

3. Be extra careful with static electricity etc. when opening up your computer.

I knew all this in theory, but I became lax after years of trouble free computing.   Just when you let your guard down, WHAM!  Reality bites.

Beware all who read this, do your backups and avoid my fate!   Happy Halloween.

This entry was posted on October 31, 2012 by Charles Ford. It was filed under Uncategorized and was tagged with Backup, Computers, Data Recovery, Hard Drives, Photography.