Keeper of the Plains HDR 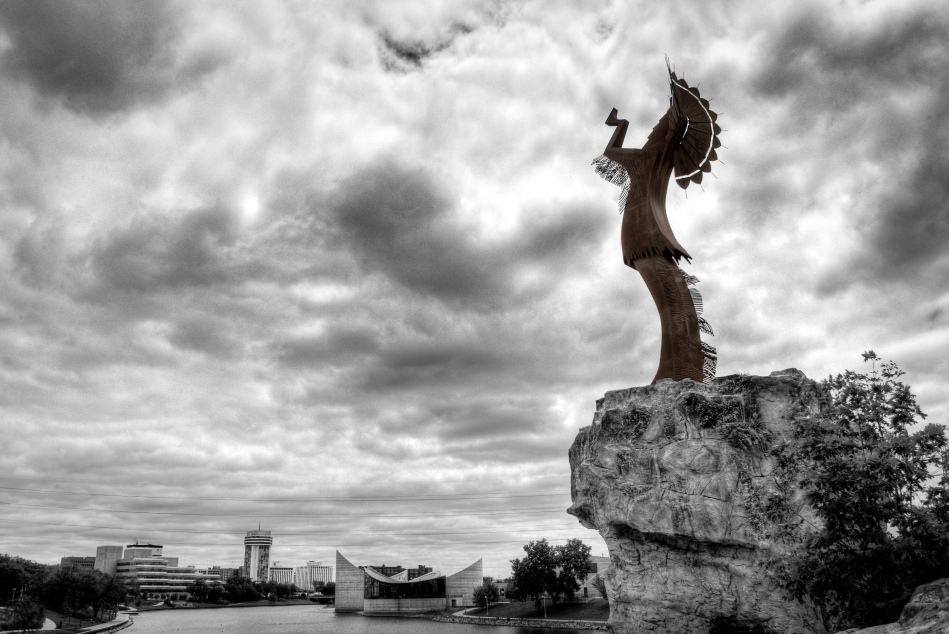 This is another of Wichita’s downtown landmarks, which I have posted images of before.   The Keeper of the Plains by native American sculptor Blackbear Bosin.   This is a three exposure HDR tonemapped in Photomatix, followed by a Lightroom monochrome conversion,  and layering in Photoshop Elements to retain some color in the Keeper.  It sounds so convoluted when I write it out,  but it is not all that sophisticated.   This vantage point could benefit from raising the camera position 15 or 20 feet higher, but that’s impractical here, at least without jockeying a very tall step ladder around, which I suspect the city would frown upon. 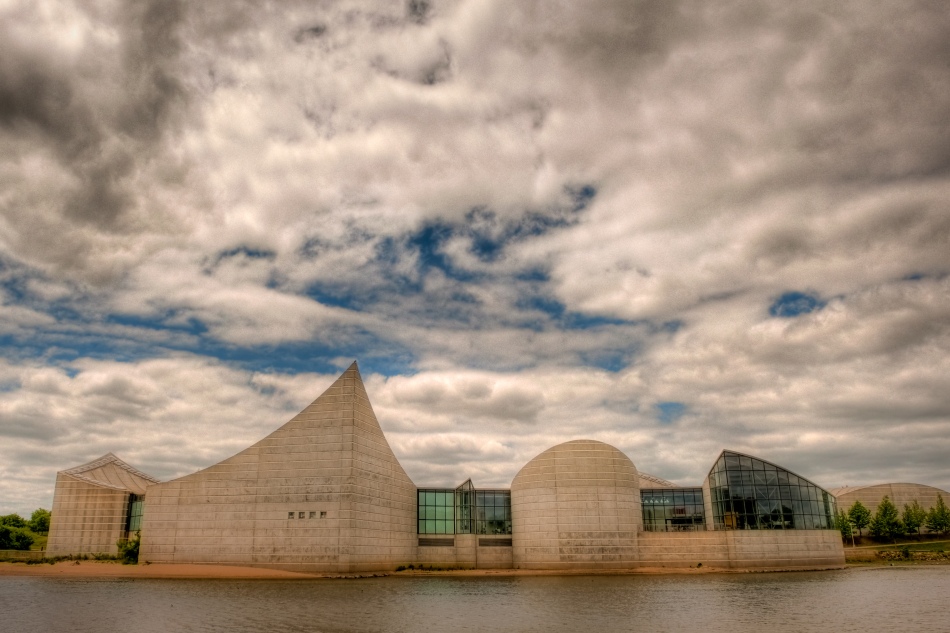 Exploration Place is a science museum along the Arkansas river in Wichita.  Designed by international architect Moshe Safdie, it is one of Wichita’s downtown landmarks.   I’ve shot it at night, at night with fireworks bursting behind it, and in the daytime, but this is my first  HDR attempt.

This is the underbelly of the Douglas Ave bridge, arguably the main bridge in Wichita.  It was rebuilt from scratch a few years ago, and I think it’s underside turned out to be a fine subject for some HDR work.   This was your basic three exposure combination, merged with Photomatix, then worked on some more using Lightroom to adjust some levels.   The base exposure was per my D700’s matrix metering, then bracketed exposures were made at -2 & +2.  (Actually my Nikon D700 cannot be set to bracket at 2 ev intervals, so I have to take 5 exposures to get my final three – a minor annoyance.)

Another zoo shot – this lion was resting in deep shade, just beyond the bright sunlit ground and rock on the right side.   I didn’t think to try a handheld  bracketed set of exposures.  (I wasn’t lugging a tripod around the zoo.)   Using the original RAW file, I created two copies using Lightroom, one underexposed at -2 and one overexposed at +2.  I combined these in Photomatix and thought it came out pretty well.  Further localized exposure tweaks were done after re-importing the Photomatix version back into Lightroom.    Between the capabilities of the new camera sensors and software like Lightroom and Photomatix, it’s pretty amazing about what can be accomplished in very difficult lighting.

Gorillas Without the Mist

During my trip to the zoo the only thing that bothered me (except for the large number of moms blocking the pathways with strollers hehe) was the vibe I was getting from the gorillas.   They all seemed out of sorts, either angry, restless, or even depressed.   Of course, I may be reading way too much into what I was seeing.

I’m not one to go overboard on animal rights, and I sense most of the zoo animals are thriving.  It’s just that I can’t help wondering  if the gorillas recognize what they have lost. (Freedom).

This guy in the last image was sitting in the corner with his head hunched low.  When I was able to finally approach him (after waiting for the crowd to move on), he looked right at me, about 3 feet away (through the glass).   I wanted for him to be able to talk to me.   Am I nuts?   Anyhow, they are powerful animals and I enjoyed the experience – but was left with a slight sense of unease as well.   Perhaps he was just looking for a quiet spot to get away from his noisy neighbors, who knows. 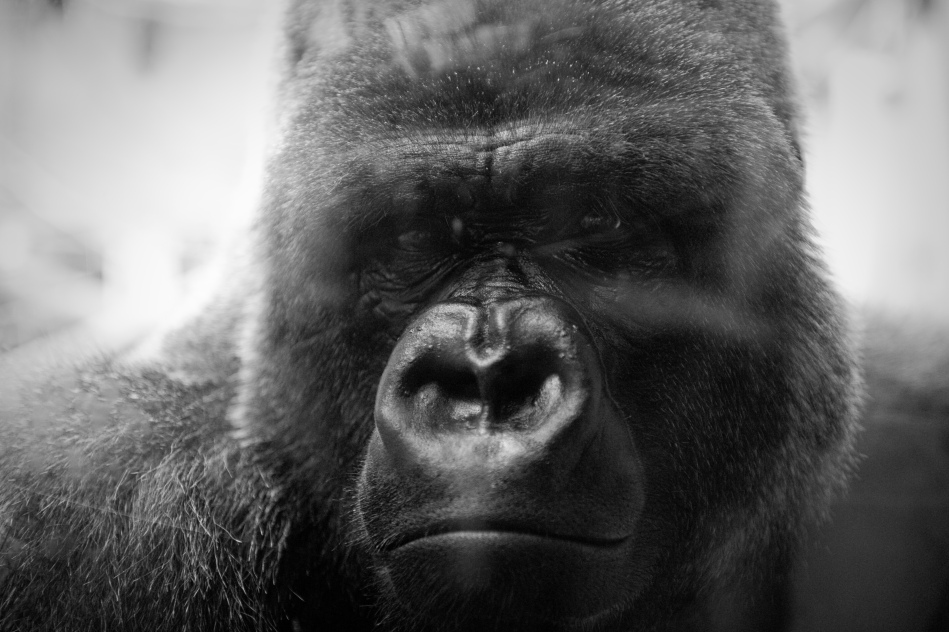 From a photography standpoint, this exhibit offers a good opportunity to shoot good portraits, if only the glass were cleaner.   For someone with a very long lens, there is also an elevated bridge vantage point where you would not have to shoot through glass. 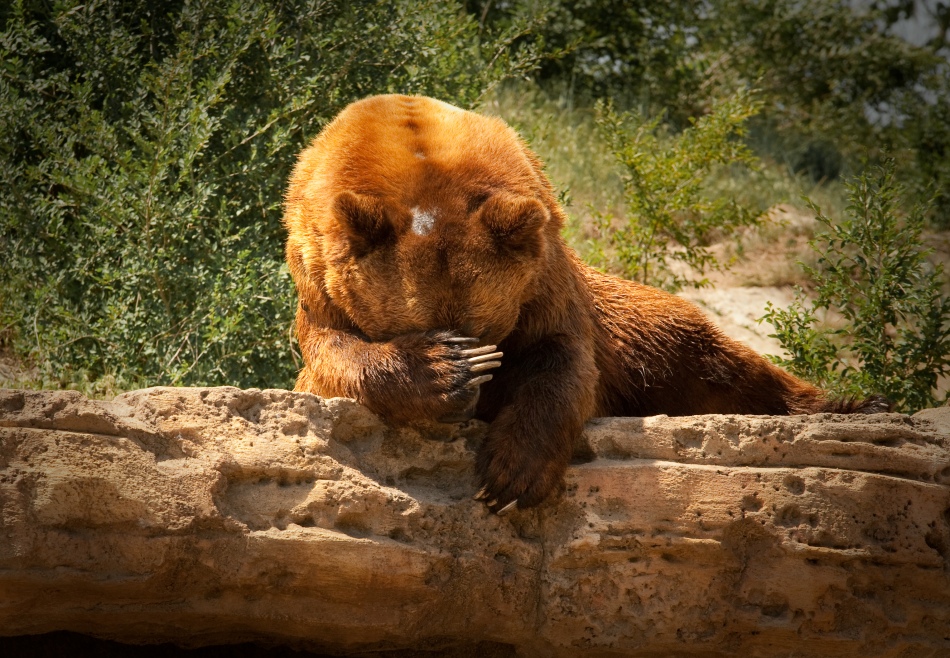 All the animals hid their faces.     Naw, I just made that up.   Saturday afternoon I had a couple of free hours, but it was the middle of the day, with not a cloud in the sky.  What can you photograph in harsh mid-day light, where the sky is not important?   I gave the zoo a chance.   We actually have a very highly regarded modern zoo in Wichita, and I haven’t been there in a couple of years so it was quite enjoyable.   One of the newer additions is a pair of grizzly bears, which you can actually get quite close to.   The only thing separating them from the people is a big deep trench (which it looks like he could jump, but I guess not.)   This means no fences or railings to shoot through, although if I had a longer lens I might have been able to isolate some nice head shots.   I’m not sure what use photographing animals in zoos serves other than being fun, I suspect true wildlife photographers would look upon this in  disdain.   It was a fun change of pace at least. 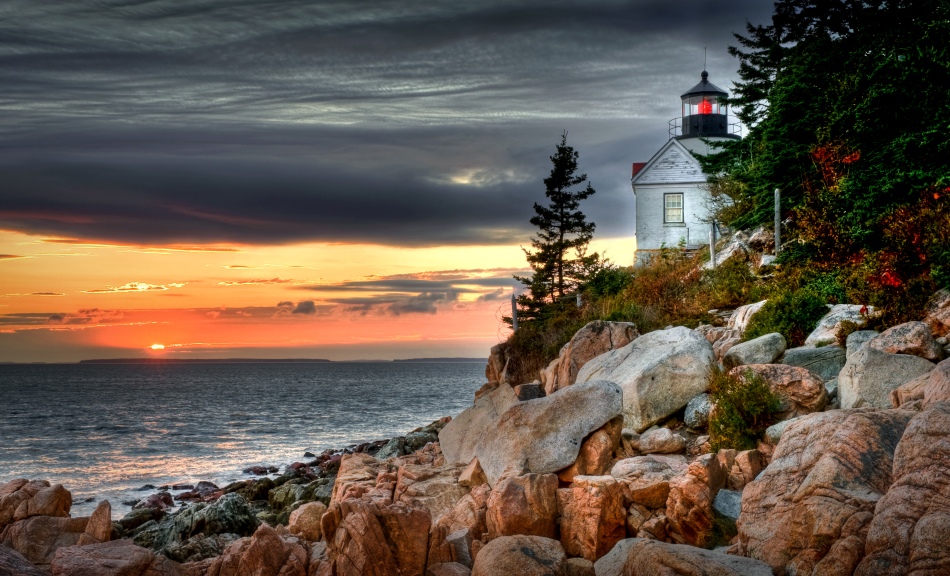 One of my first blog posts was an HDR photo of the Bass Harbor Lighthouse at sunset.   Now that I have learned more, read more, seen more, I’ve come to cringe a little  over that early, over-the-top saturated version.  This time I went back and started from the original bracketed exposures and gave it another go, trying to achieve something more realistic.  I’ve toned down the saturation, and eliminated most of the halos.

Bass Harbor Lighthouse is just a great location, even if you end up shooting the same shot 1,000 other photographers have gotten.  Like I did.   At least the sky is different every sunset!

Here’s that earlier version for comparison.