Something of a miracle happened yesterday morning in Wichita, we had another dense fog.  Since it was a weekend, I was able to venture out with my ‘real’ camera and shoot with no time pressure.  It was creatively rewarding, but it was also just plain fun.   Wichita sits at the confluence of the Big and Little Arkansas rivers, which under the right circumstances can provide a nice foreground water refection.   I shot, and shot, until I couldn’t shoot anymore.  Instead of burning off into sunlight, this fog hung on a long time and was followed by thunderstorms.   I am hereby designating this as ‘ fog week’ at the Warped Prism, at the end of which anybody who is reading this will probably be tired of bare trees in the fog.

This poor leaf met it’s end on the concrete.  My self assignment was to make it look interesting.  According to my wife I have failed.   Today I feel the need to photograph, so anything is worth a try.  The weather here is cold, damp, gray, and generally depressing, but if I were an optimist I would say the light is soft, diffuse, and appealing.   This was taken with my little Canon S90 and tweaked in Lightroom.

A Taste of Spring

Like many parts of the country, Wichita has been experiencing quite a winter.  We’ve had several major snowstorms, but one week after the most recent one we were having record high temperatures in the 70’s.  Crazy stuff.  We have a nice botanical garden in the city, this is one of my better images taken there.  Hopefully a reminder of things to come.

Making Do On A Foggy Morning

This morning there was a beautiful blanket of thick fog over Wichita.  While I really wanted to be out shooting with my ‘real’ camera,  I was at an appointment and couldn’t be shooting.  On the way home the fog had begun to burn off, but I stopped at one of our more scenic urban areas to see what I could see.  Unfortunately, all I had with me was my new 4th gen iPod touch, which now comes with a camera.  A very paltry, inadequate camera, apparently with far less resolution than my first digital camera circa mid 1990’s.  (The iPhone has a much better camera.)   However, one must rise to the challenge and I though it would be an interesting experiment to see what I could get with the iPod.  These are my favorite two shots, they have just been cropped slightly from the originals.   I can see where you might be able to achieve some hip cool low-res imagery if that’s your thing.   I look forward (sort of) to trying more of this.   But I tell you, I yearned for my Nikon this morning, or even my little Canon S90.   I guess any camera is better than no camera at all. 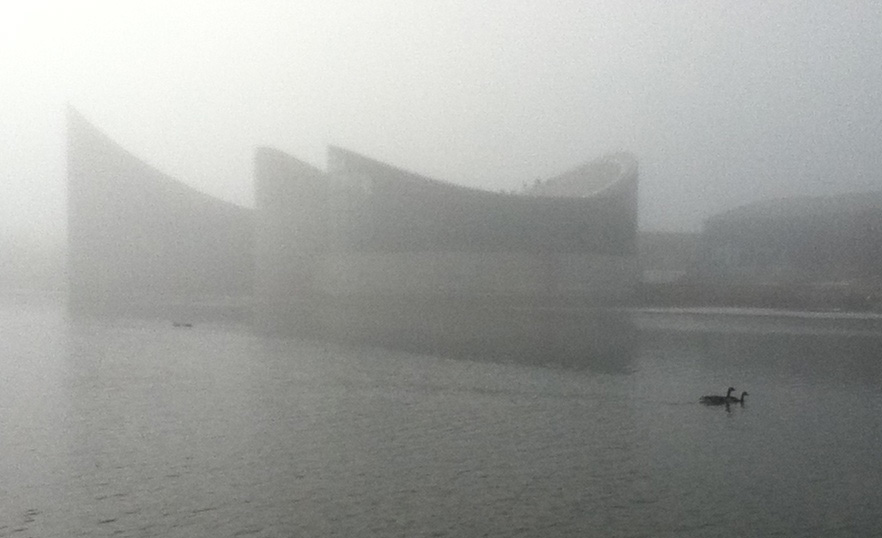 We’re blanketed in snow here in south central Kansas, and are just coming off one of the coldest nights ever recorded here, -17 degrees F.   Yes, there’s a minus sign in front of that 17.  Anyhow, I took a quick walk around the yard and found the tree shadows on the snow more interesting than anything.   The sun was getting low in the sky and the light turning a little warm.   It almost looks like I was panning the camera, but you can see the snow is sharp.

Another scene from one of my favorite locations visited in the Caribbean, the Old San Juan Cemetery.   Hey look, I broke the rule of thirds yet again!  That orange dome against the ocean just intrigued the heck out of me, although as I recall I was 90% of the way towards a heat stroke by this point so instead of the usual 5 to 20 frames I usually take of a good scene, this is the only one I have of the dome itself, isolated against the background.

Cemetery By The Sea

A little something from a warmer climate this morning.  This is the beautiful cemetery located between the stone walls of fortress El Morro and the ocean, at Old San Juan Puerto Rico.   This particular image is an HDR with some additional post processing.   The cemetery had just closed for the day when we finally found the entrance (a long story in itself), so I couldn’t wander inside.  The location is packed with beautiful statuary.  Another one of those travel locations where I wish I had more time to explore.