I don’t even like this photo that much.  So why am I posting it?  Good question.  It doesn’t have a carefully crafted composition, probably due to the fact I was running across a busy road after a hail storm with lightning about.   I sort of like it though.   There was no pot of gold to be found, but there was some golden wheat.   One of my favorite inspirational photos was created by the late Galen Rowell, who took a famous image of a rainbow and a palace in Tibet.   Perhaps that was what I was going for here.   Unfortunately I am too old to run very far, and there are no palaces to be found, and this rainbow appears to be lacking in the blue and the violet.   I still kind of like it, so there you have it.

Here’s another, taken a couple of minutes earlier.  Somehow the transmitter tower does not really have the visual power of  a palace in Tibet, but we must work with what we have available. 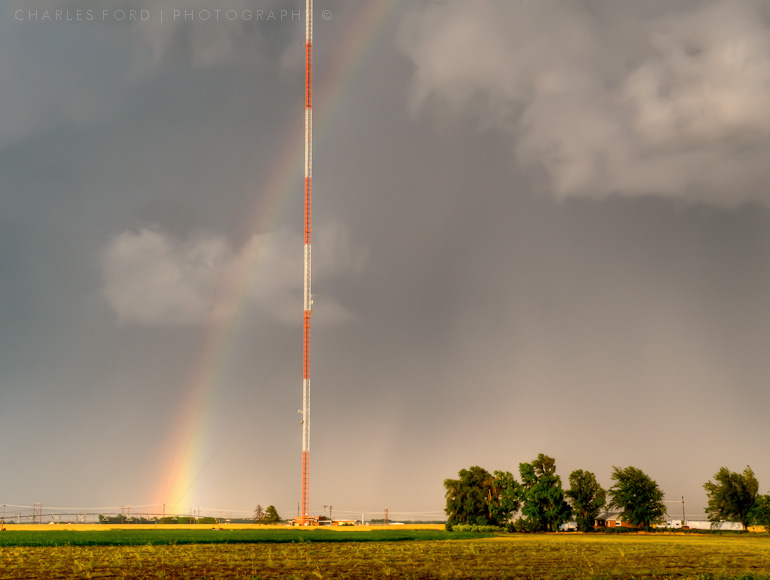 I believe the wheat harvest in much of Kansas is now complete.   A couple of weeks ago, this particular field was glowing amber in the setting sun.   My wife and I can’t decide whether we were just more aware of it this year, or if the wheat was indeed more golden than usual.   In any case, the fields were beautiful this year.

Once again I am shooting for the Wichita Riverfest photo contest.   Using Google Earth I drew some lines based on the launch sites  and knew where I wanted to set up this year.   Going by previous years, I decided when to arrive in order to secure my spot.   Unfortunately, the  rainy and cool weather earlier in the day must have thinned the crowds.  I found myself with one and a half hours of waiting.  Early on it was a lonely vigil.   I was almost directly under a huge steel power line tower, and half expected security from the power company to come out to get rid of me.   Turns out no one ever spoke to me except one guy who asked me “What time do the firecrackers start?”  🙂

What to do while waiting?  I shot a few bracketed sets here, one of which produced  a nice little HDR image with the rising moon above the clouds.    This image will not be in the contest, as it doesn’t really show any of the Riverfest.   (HDR is probably a no-no anyway for the contest.)

Once the show finally started, the fireworks rose above the saddle in Exploration Place across the river as expected.  I can’t post any of those until after the contest concludes.