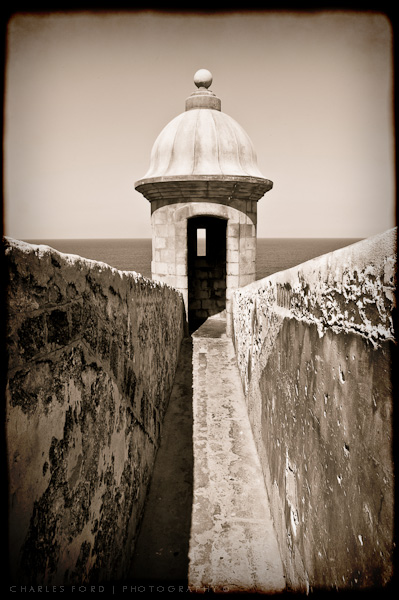 One of the iconic Garita turrets along the wall of the El Morro fortress in Old San Juan,  Puerto  Rico.

Many of my fog images seem to look pretty good with a little toning, but for some reason I  find the ones with some man made element (bridge, lamp post etc.) to be my favorites.   Anyhow, I will try and resist doing too many more of these for now….I could end up with ‘Toned & Framed No. 187 before long.

Foggy bridge, toned in Lightroom.   As a side note, I feel compelled to mention that I detailed the steel railing on this bridge many years ago,  as part of my “real” job.  Meaning I drew the detailed blueprints of the rail, using the architect and engineer’s more general drawings as the basis.   That’s what I do for a living, although usually for buildings, not bridges.   The fog made everything look good. 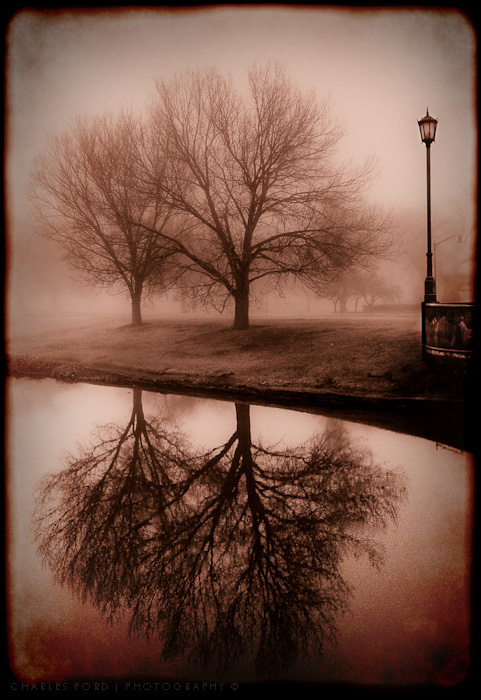 Desperate for new material….so back to the old.   This is a foggy morning image that I did a little toning on using Lightroom (which I have never tried before).   As if that were not enough, I’ve gone and downloaded a free frame-adding pack from Filter Forge to add the border and more distortion.   Rather than doing anything else, like adding the Eiffel Tower or pink elephants, I decided to stop.

So back in 2006, I’m in one of those once-in-a-lifetime locations,  in interesting morning light.  I’m standing outside the park bus in the Polychrome area of Denali National Park, Alaska.  So what do I do?  I decide to shoot jpeg only because I’m worried about running out of memory cards/storage later in the trip.   Bad move!   The plan was to stop at this area on the way back, get off the bus and roam.   Great idea except the bus driver did not stop here on the way back.  By the time I got off the bus he was already down the mountain.   Anyhow, so that leaves me with only jpegs of this scene.   The cloud tops were really blown out here and there, I expect I would have had better luck recovering some detail there if I had been shooting RAW, as I do 99.9 percent of the time.  So I have added this to my list of “what I would tell myself if I slip through a hole in space-time and find myself having a conversation with my past self”.    ” Tell dad to buy Pizza Hut stock (1960’s)!    Buy Microsoft stock!   Shoot RAW everywhere in Denali!”

I revisited this image, and did a single exposure HDR version…meaning I used the original jpeg, made  -2 and +2 versions of it, then ran it through Photomatix.   The result is what you see here.  If only I had been shooting RAW, I think I would have had better luck with the sky/clouds.   Anyhow, it is still pretty and I will always think of this scene the next time I am tempted to shoot jpeg only.    I may have even posted this image in the early days of my blog, but I am a little better at the HDR nowadays so no harm done.  I hope. 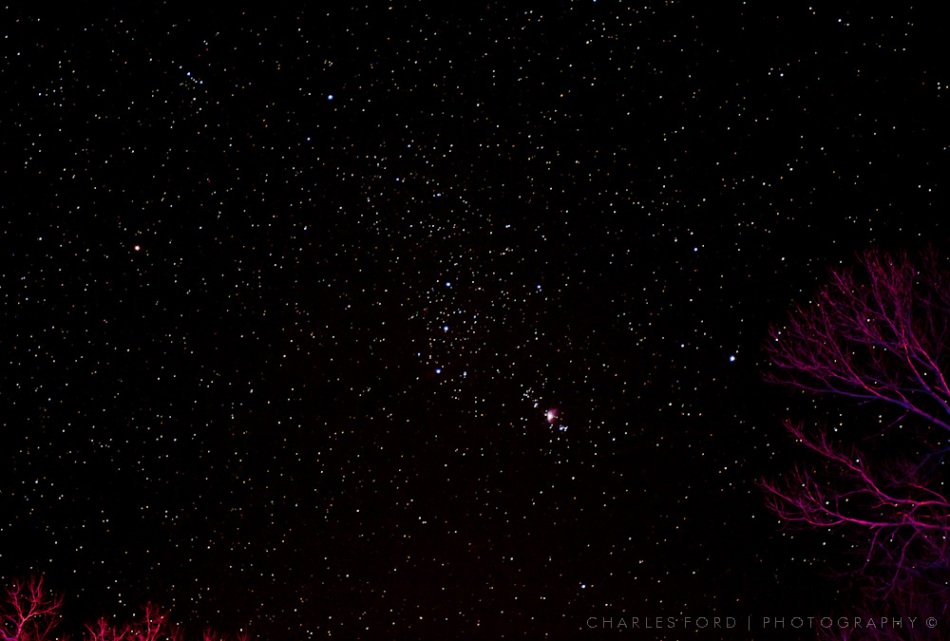 I am not an astrophotographer, although I hope to get into it someday in the future.   While shooting outdoor Christmas light displays in a small northern Kansas town, I snuck a few frames of the sky.  Away from the light pollution of Wichita, the stars were beautiful.  This is the constellation Orion.  Even though there were many stars visible, the camera was able to image many more than were seen with the naked eye.  This was shot on my D700, at ISO 1100,  f/2.8 for six seconds.   You can clearly see the bright glowing pinkish gases of the Orion Nebula (a.k.a. The Great Nebula, a.k.a. M42)   in Orion’s sword.  This was shot at 58mm, I would like to experiment with longer focal lengths.   My time was limited on this excursion but it only makes me want to try this again.   This is just the camera on a tripod, no fancy piggyback telescope mount or anything like that – but that sure would be fun!   I’m pretty sure the oddball colors on the tree branches are due to the Christmas light displays below, not some color temperature wackiness or other factor.