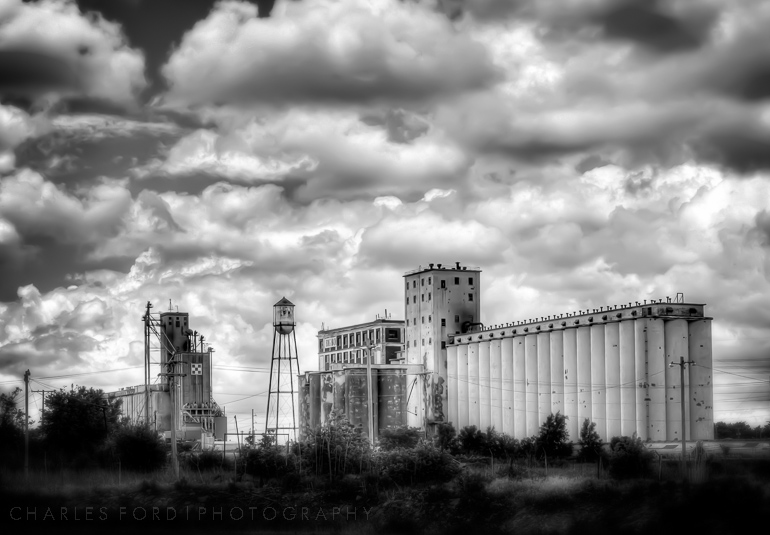 This is a scene from one of the less attractive sides of Wichita.  Grain elevators are a common sight here, as they are all across the plains.   I also seem to be obsessed with old water towers that look like rockets on the launch pad.  This particular one has been bedeviling me for years, this is the first time I actually stopped to photograph it.  The clouds were interesting on this day, so I stopped for a grand total of about 90 seconds to grab a few frames.   (This involved parking at the side of a busy street in not the greatest area of town. )  It’s an HDR, monochrome conversion with a little extra post processing.

My wife, bless her, is not a yes (wo)man.   She is frank and honest with me when I show her my photos.   Supportive always, but never shy to say “don’t like it” if she doesn’t like it.  I think this is probably a good thing for me, but raises the question….could she be wrong?   Sometimes perhaps.  This makes me think of the subjective nature of art, two people can view the same piece and have totally different reactions.   If I had to guess, I’d say music is even more subjective than the visual arts, but that’s just the impression I get from life experience.    Anyhow, in this post I offer two images from Eureka Springs, Arkansas that have been sneaked past the spouse filter and onto the blog.   She didn’t like either of these.   I’m not claiming them as my best work, but I thought she was……too harsh!   🙂    Sorry honey! 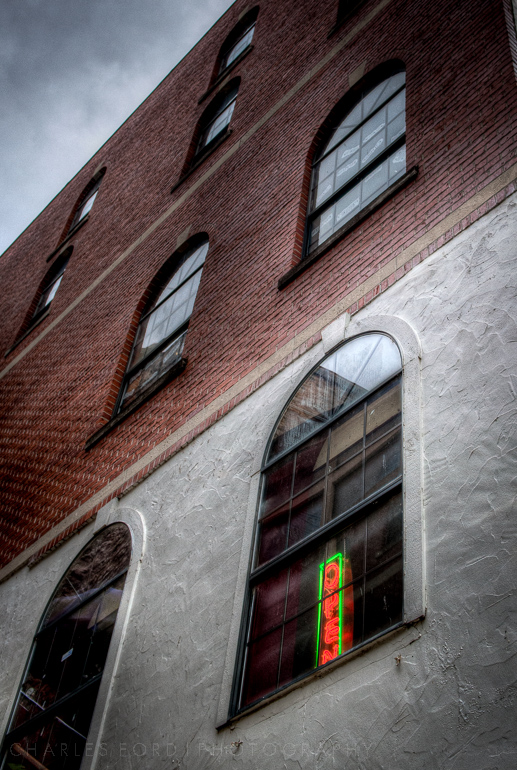 Another slice of Eureka Springs, Arkansas.  This is the Basin Park Hotel.  There is a curious lack of photos for the exterior of the building on their official website.  I guess they figure that’s not one of it’s strong points.   I think it has some historic character.   I kind of like this because it looks like the flower box in the upper left could plunge downward at any moment. 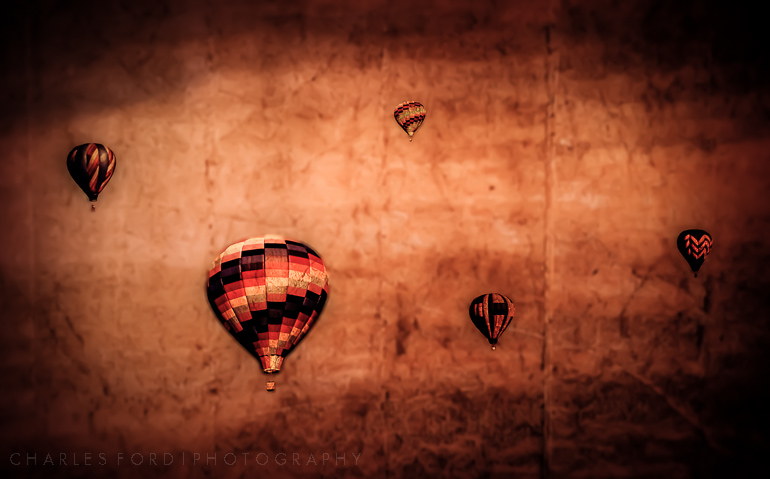 Did you ever work on a project, only to find at the end it did not turn out nearly so brilliant as you had convinced yourself it would be?   Alas, I give you Five Balloons.   There were going to be six balloons, but we at the Warped Prism have suffered budget cuts like everyone else.   All the tools were pulled out for this one….Wolverine slide converter, Lightroom, Photoshop Elements, and Perfect Photo Suite 7.   It’s still photography….sort of.    Kinda.    Happy Friday!

This is from a slide, probably the late 1980’s.   There were some incredible clouds forming right overhead, lit up in shades of bright orange by the setting sun.   I remember I was having to shoot basically straight overhead, no foreground possible.   This was one of the most vividly colorful cloud displays I can ever recall witnessing.

A blast from the past.  Back in the 1980’s I was in a local park when some hot air balloons became visible, drifting slowly across Wichita.  I saw one of them was going to line up with the giant smoke stack at North High School, which was just across the river from me at the time.   I waited until the right moment and took this exposure.    There it resided in it’s boring slide mount for probably close to 30 years, until last night it met up with my new Wolverine Slide Converter gadget.   Thanks to Ken Bello for making me aware of this device.  I’ve started converting a few old slides, trying to learn the quirks of the Wolverine.   (By the way, that was almost the title of this post…”The Quirks Of The Wolverine”. )   This particular image has also had some Lightroom work done on it to make it a little more graphically interesting to my eye.   I look forward to finding other old gems.

Another image from the ivy strewn stone wall of an abandoned building in Eureka Springs, Arkansas.

The facade of an abandoned building in Eureka Springs, Arkansas.   There were many no trespassing signs around so I had to shoot this from the street, working with about a 3 foot wide space between traffic behind me and a sheer drop off into a drainage ditch in front for the tripod….meaning I couldn’t get in there for any oblique angles etc.  Oh yeah, it was raining a little too!   I always wonder what the people driving by are thinking….are they thinking “cool, I wonder what that guy is photographing?”, or something more like “what an idiot!”   I suspect more of the second.