I was cooking a little dinner Saturday night when a big crash of thunder startled me.   Not that thunder is uncommon here, just that we are in a drought and have not seen rain for a long time.  A brief rain shower was followed by a fairly good lightning display, so naturally I had to run out and try to get some lightning images.

The western sky has been interesting this month.  Once again, we had Venus and Jupiter shining brightly,  this time joined by the crescent moon.   That’s Venus next to the moon, with Jupiter at the bottom of the frame in the image above.   I felt it was my duty to run out and shoot a few frames for the record.  Venus is close to it’s maximum brightness, just incredibly bright in the evening sky. 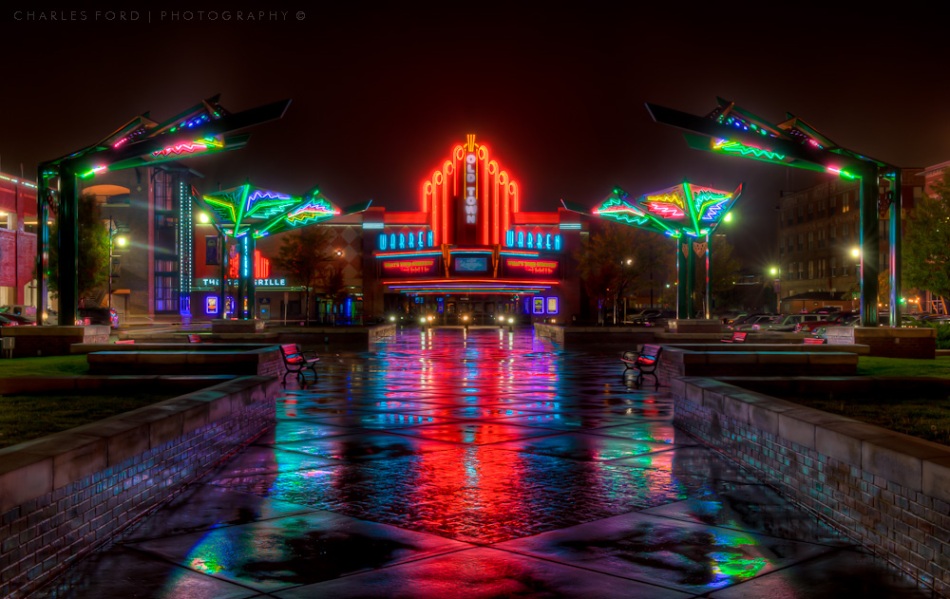 Not much beats neon lights reflecting on rainy pavement.   This is HDR, taken in  “Old Town” Wichita, where the Warren Theater anchors a series of shops and restaurants around the perimeter of the square.   Rain was still falling during this adventure.  My Nikon D700 has good weather sealing, but it was getting wet  enough that my little voice saying “you could be ruining your camera!” finally got the better of me and I gave up.    This HDR was generated and tonemapped in Photomatix Pro, then finished off with a little cropping, spotting, level tweaks, and noise reduction  in Lightroom.

As regular readers will know, we had a brush fire, well I guess a “fence/brush fire” on Saturday caused by fireworks.  Sunday night was relatively calm, but Monday night, the fourth, was crazy.   It seems every year I see more and more big fireworks inside the city of Wichita.   Since none of them were going off right next door this time, I was able to actually enjoy it.   When I saw the moon setting in the west with some fireworks in front of it, the light bulb over my head went off and I ran inside for the Nikon D700 and tripod.

The illicit neighborhood fireworks launchers were much less reliable than a professional show, so it was a hit and miss situation.  By the time the folks to the west got their act together, the moon had gone behind the trees, so I only got a couple of  keepers there.   There were other shenanigans in the general area and I had a grand time running around trying to get something good.  Happy fifth of July to everybody who survived the fireworks this year.

Hey, let's shoot some fireworks at the neighbors!

Fireworks In The West, Over The Tiny Looking Moon.

Fireworks to the East