Another 2008 image from Acadia National Park.  This was among the very first images I took in the park.  We had arrived at Bar Harbor in the evening, and I took a little recon drive into the park.  I recall driving around a curve and two things hit me….first I recognized this was beaver pond which I recognized from my trip research, second…wow!   I HAD picked the right week to visit, fall color looked to be peaking inside the park.   I wasn’t alone either, there were at least five cars parked along the road , and five to ten photographer with tripods shooting the trees and glassy water in the fading light.  I pulled over, found a spot, and took a few photos myself of course, the best of which yous see here.

Wet rocks.  I traveled almost two thousand miles from Kansas to Maine, to take photographs of wet rocks.   Because that’s what we do.  (Fortunately,   I came back with a lot more than wet rock photos.)  These are the particularly photogenic rocks of Boulder Beach in Acadia National Park, Maine.  This location is along the shore just north of the Otter Cliffs in my last post.   The waves have worn these rocks super smooth.  Generally, they range in size from baseballs, up to watermelons.  Of maybe softballs to footballs.   Most of them are grapefruit sized.   You get the idea.   I must add that the entire “beach” is composed of these rocks at this spot.  It was very difficult to walk around and use a tripod.  Not an ankle friendly environment, especially in the rain.   The plan was to be here for some super cool sunrise photos-but there were low clouds and rain, no sun – one has to improvise.   I re-post processed this one recently and am quite fond of it. 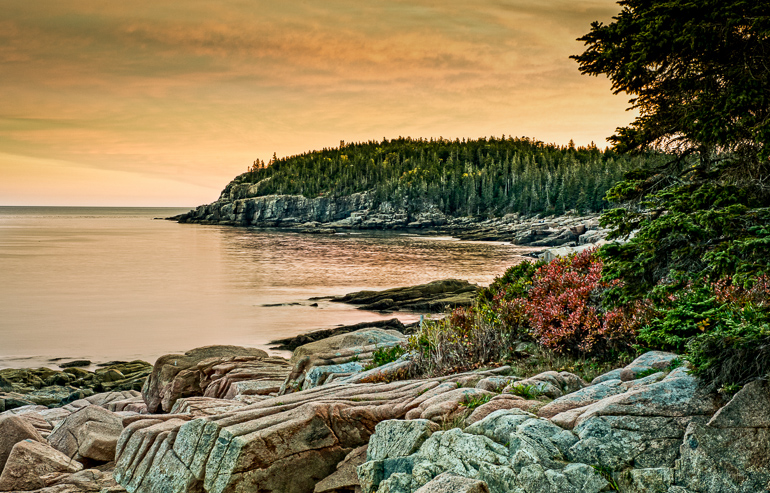 I’ve been revisiting some old images, and found this one from a 2008 visit to Acadia National Park in Maine.  This one was overexposed but I was able to extract some lost detail and color in the sky, much to my surprise.  Shooting RAW is the only way to fly!   I believe that’s Otter Cliffs in the distance.  I love Acadia – it’s a do-not-miss destination especially if you time it right, and visit in the correct one to two week period for fall colors.   (Which varies year to year of course-usually sometime in October.)

I was fortunate to spend an unhurried afternoon at Eagle Lake, Acadia National Park, Maine back in October 2008.  This is another HDR image that has been processed to (hopefully) appear more on the normal side, rather than surreal.  There was a bird (not an Eagle) patiently sitting on that rock in the foreground, which was a nice added touch.

Surreal Sunrise On The Summit Of Cadillac Mountain

Cadillac Mountain is located in Acadia National Park, Maine.  At 1,528 feet it is a mere bump compared to the major mountain ranges, but it is the tallest peak along the coast of the eastern United States.  I was able to be at the summit for one sunrise, and it was very interesting.  (You can drive to the summit and park your car, but if you want to picture me heroically rope climbing to the top it’s OK with me.)  This particular morning it was partly cloudy, there were clouds out over the ocean, low clouds hugging the coast, clouds actually flowing around the summit of the mountain in the brisk wind….it was visually exciting but also chaotic.   I didn’t think the photos I took when the sun was lower quite worked….they were interesting but there was so much happening they seemed unfocused.  Not literally, but subject-wise if that makes sense.  When the sun rose higher it, I shot some images that I find more appealing, even if they looked like they were taken on the surface of Mars.   (If Mars had plants.)   The sun was filtered by clouds at this particular point…it’s still blown out photographically, but hey…it’s the sun.

Here’s one of the earlier shots, it has pretty colors but I don’t think I quite nailed a satisfying composition.  Anyhow, it was fun to be there and quite memorable.

I know there is debate on the artistic merits of the HDR (High Dynamic Range) technique and how it is applied.   I’m not one of the minimalists, but I do agree it can certainly be overdone.   To tell you the truth my only barometer is whether or not I think it looks cool on whatever image I’m working on.   I thought the more extreme HDR look worked for this one, but of course not everyone will agree.   Jordan Pond in Acadia National Park, Maine is a photogenic location, but I was never able to catch it with a calm surface on my short time there.   It is certainly a location I would like to revisit someday.  This image was created from a bracketed set of three exposures, combined using Photomatix software with a final tweak in Photoshop Elements.

I posted an unremarkable photo yesterday to illustrate a point, I thought I’d use one today of the same general subject which I thought turned out more pleasing.  This was just a quick shot from the top of Cadillac Mountain in Acadia National Park, Maine.  At the time I had been more interested in shooting the sunset, and the brightly lit cruise ship in the harbor below, so this was image was something of an afterthought.   I think I find it works better as a vertical crop, the original was horizontal.