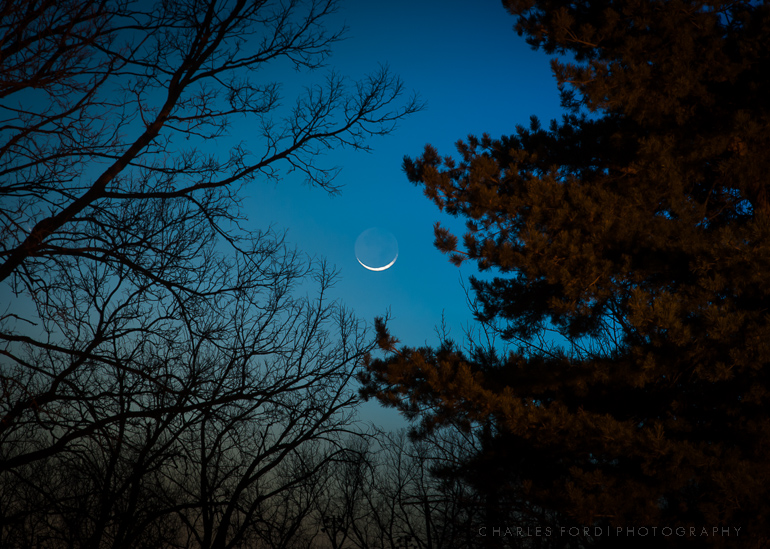 I had a plan last night.   I had my location selected, with an interesting foreground object (windmill).   The previsualized shot would be windmill silhouette,  comet Pan Starrs, and the almost new 1%-2% illuminated sliver of the moon, hanging there like a cosmic smiley face.    It would have been glorious!  Alas, although the moon became visible as expected, where expected, the comet did not.   I was unable to see it, even with my small binoculars.   I had noticed a high thin layer of hazy clouds as the light dimmed, I suspect those were the reason the comet was not visible.   Even though the sky looks clear in these photos, I could see through the binoculars there was a high haze.  I should also note that in my original camera position, the trees you see here were not obscuring my view.

As I was walking back to my car, I noticed a fair amount of earthshine becoming visible on the moon, so grabbed a couple of moody shots of that.  (Earthshine is sunlight reflected from the earth back to the night side of the moon. )   It was fun to be out shooting, even if the comet was a no show.   Online this morning, I’ve seen several images similar to the one I envisioned, not everyone struck out last night.

And finally, here’s a photo taken shortly after the first image posted.    I cropped it tighter to show you….what is that streak near the moon?   Could it be….is that the comet?!

No, sorry, its just the contrail of a high flying jet aircraft.   I thought about trying to pass it off as the comet but figured the astrophotography police would bust me for it right away.  I’m thinking of trying for a comet shot again tonight or at least sometime this week.   The windmill will still be there.

This entry was posted on March 13, 2013 by Charles Ford. It was filed under Uncategorized and was tagged with Astronomy, Astrophotography, Comet, Earthshine, Moon, Moonset, Pan Starrs, Photography, Photos, Sky.