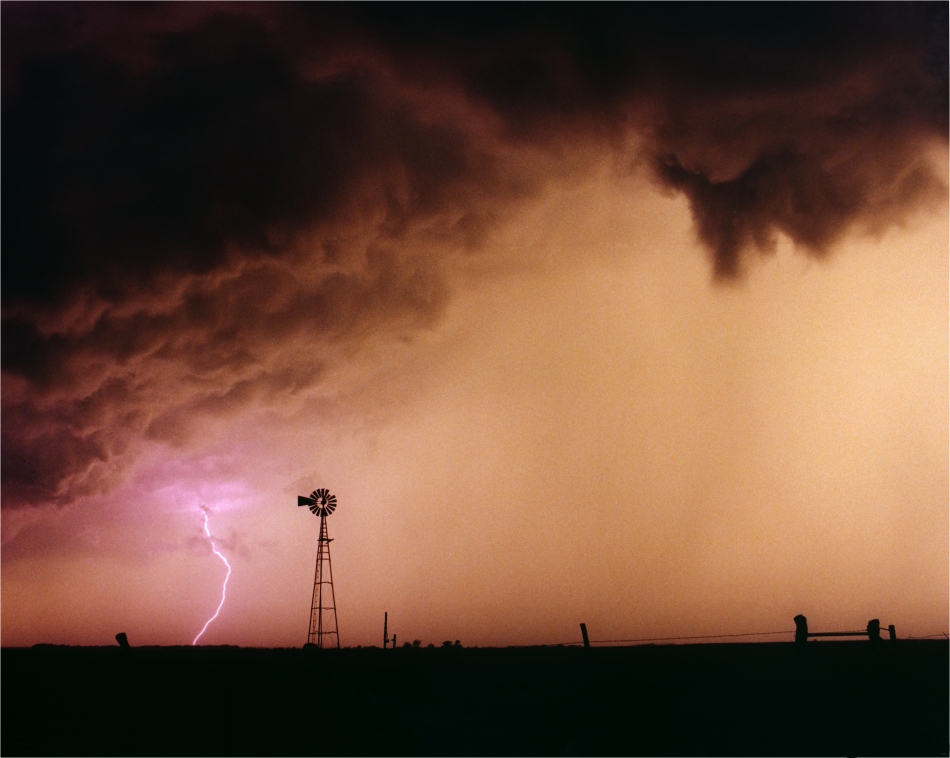 This is from my film days, taken in the late 1990’s during my one and only real storm chase.     The person I was with had a meteorology degree and had done this before, so I felt like I was being semi-responsible about it.   (That is, until I found myself  frantically jockeying  a metal tripod around in the middle of multiple lightning flashes.)   I fired off a few exposures of several seconds each, then got back in the car, relieved the lightning had behaved.   In this particular spot everything came together visually when looking west towards the setting sun (behind the clouds.)   The clouds were interesting, the foreground of fence and windmill in silhouette, lightning, and the absence of overhead powerlines.  (I hate overhead power lines from a photographic perspective, although I confess to  enjoying  the electricity they provide.)   This particualr storm cell dropped a tornado a few minutes later to the north, but we were out of the immediate area by then.

During most of my film era I shot transparencies (“slides”).  For some reason now forgotten I started shooting print film for awhile, this storm was on print film.  I am embarrassed to report that the original negative is lost, or at least misplaced on a long term basis.  OK, it must be lost.   I have every slide I ever took, but those darn negatives must have been  tricky to keep organized.

This entry was posted on October 21, 2010 by Charles Ford. It was filed under Uncategorized and was tagged with Landscape, Lightning, Photography, Severe Weather, Sky, Storm, Thunderstorm, Weather, Windmill.